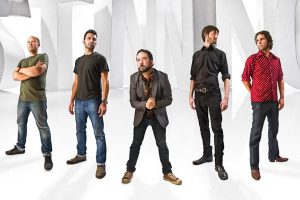 STNNNG (pronounced “STUNNING”) are from the Twin Cities of Minneapolis/St. Paul, Minnesota, USA.
Formed in early 2002 with the first lineup of Chris, Nate, Jeremy and Adam. They started playing on April 5, 2003, at Big V’s in St. Paul, MN, opening for Sicbay, Cheer-Accident, and Oh,Beast!. The first live performance consisted of 5 songs and clocked in under 12 minutes.
In November 2003, they recorded for the first time with David Storberg (Signal To Trust/Misfires) at IPR in Minneapolis. Four tracks were recorded: An Idiot for Tits, How to Avoid an Assassination, I felt it; for an instant, I knew what it was…and then it was vanished, and We Keep it Dark. The latter two songs found their way onto the reverse side of a split 7” with Ohio’s The Means (released by Nodak Records out of Chicago), while the former two enjoyed brief airplay on local radio station, Radio K, after the band submitted all four songs as a demo package. This demo was nominated for “Best Punk Recording” by the Minnesota Music Academy in 2004.
July 2004 found the band back in the studio, this time in Chicago at Mike Lust’s “Phantom Manor”. The three day session resulted in STNNNG’s first full-length release, Dignified Sissy. Modern Radio released the CD while the band put out the LP themselves. STNNNG integrated a bass player, Jesse Kwakenat, into the band in January 2005. Dignified Sissy was released in April 2005.
The followup album to “Dignified Sissy” was recorded, again with Mike Lust in two sessions, September, 2005 and May, 2006. The 2nd full length album, Fake Fake was released by Modern Radio on CD and vinyl in November, 2006. STNNNG toured the East coast in the Fall of 2006 and continue to circle the Middle West.
STNNNG has finished recording their 3rd full-length album slated to come out in October, 2010. The album is called The Smoke of My Will and will be released on vinyl by Modern Radio. The album was recorded in a number of different places between 2008-2010 including STNNNG’s practice space, Old Blackberry Way in Minneapolis and Flatblack Studios in Iowa City.
In the Fall of 2009, Ben Ivascu (Signal To Trust, Private Dancer, Building Better Bombs, P.O.S., etc.) joined STNNNG as their new drummer.
Now, the guys are proud to introduced you their fourth album Empire Inward, released only on vinyl by Modern Radio February, 2013, and for Europe by the French label Rejuvenation on CD and vinyl in march, 2013.
They want now to come overseas to preach the good vibes.
Stay in touch !